He has written about fifty theatre texts that have been performed in various theaters in France and abroad. He collaborated with Georges Aperghis in musical shows. His texts offer different forms and genres: dramatic poems, intimate epics, short dramas, monologues or solos. The theme most often discussed is The Inaugural Place where anything can happen. The land, the native soil and families are the main landmarks. Dramas and farces come together to represent our world, our myths.

He is an Arts and Literature Officer and received the French Academy Theatre Prize in 2010. He lives in Paris. He was born in the East of France, in Besançon in 1946.

Kondylaki studied media at Panteion University, theatre at Censier-Paris III and comparative literature at Paris IV-Sorbonne, the latter under a State Scholarships Foundation (I.K.Y.) scholarship. She specializes in modern and contemporary drama, theatre and media theory, and theatre editing and programming policies. Since 2004, she has been collaborating as an associate lecturer at the Faculties of Theatre Studies of the National and Kapodistrian University of Athens, the University of Patras, the University of the Peloponnese and the Hellenic Open University (Creative Writing Master’s programme). A regular collaborator of Institut Français de Grèce, where she runs the Theatre Translation workshop, and editor of the theatre series of Nefeli Publishing, she has translated into Greek, Marina Tsvetaeva, Maurice Maeterlinck, Michel Vinaver, Philippe Minyana, Alfred de Musset, as well as works by Greek writers such as Dimitris Dimitriadis, Yannis Mavritsakis and Elena Penga into French.

Member of SACD (Société d’auteurs et de compositeurs dramatiques) and of the Greek committee of Maison Αntoine Vitez, Kondylaki has served as curator for contemporary Greek theatre at Athens & Epidaurus Festival (2016 – 2019), as member of the working committee for the restructuring of theatre grants (2010), as vice president of the grants committee of the Hellenic Ministry of Culture (2011-2012), as a member of the expert committee for funding to French writers in Greece (French Embassy in Greece, 2011-2013).

He has played in several performances as Blue Jasmin by Woody Allen, Aias by Euripides, Ekklisiasouses by Aristophanes, Cités à la dérive by Stratis Tsirkas, The Hothouse by Harold Pinter, The Interest by Dimitris Demetriades, Mataroa, la mémoire trouée by Ariane Mnouchkine and Helen Cinque, Babylonia by D. Byzantios, The Mandrake by Niccolo Machiavelli, Motortown by Simon Stephens, The Possessed by F. Dostoyevsky, Macbeth by William Shakespeare, Acharnians by Aristophanes, Woyzeck by G. Büchner, The lieutenant of Inishmore by M. MacDonagh, Peer Gynt by Henrik Ibsen, Bacchae by Euripides,  Edward II by Christopher Marlowe etc

He has directed many plays as Cyclopes by Euripides, Penthesilea by Heinrich Von Kleist, The Eyes by Pablo Messiez, Two Gods by Lenos Christides, The Cherry Orchard by Anton Chekhov, Mister Cunt by Lena Kitsopoulou,  The Author by Tim Crouch, The Mandrake by Niccolo Machiavelli, My beloved Herbert by Herbert Achternbusch, All mushrooms eaten, although some only once by Hervé Le Tellie, Almanac by Marianna Kalbary, King’s Clown country by Simela Mesveliani, Nourian’s Celebration by Volker Ludwig, The Author by Tim Crouch, Don’t be payed, don’t pay by Dario Fo etc

Kleio Gizeli (born in Athens 1978) graduated from Athens University of Fine Arts, Course Tutor Tr. Patraskidis, while she also attended the departments of Scenography and Photography (1997-2002). She did Erasmus Programme at Fine Arts in Université Paris 8, France and completed a Master Degree in Fine Arts at Central Saint Martin’s College of Art and Design, London (2005).

Since early on in her practice, her work has been based on forms of fragmental narrative, ordinary snapshots and imaginary characters that linger in between the familiar and the eerie. In her meticulously crafted dioramas and small scale installations, constructed worlds come together as a staged scene, often with the use of a media variety, such as mircosculpture, sound, animation, light and motion. Throughout the years, there has been an increase of attention to the craft and minute detail within her work, while cinema, painting and photography are some of the most prominent influences and aesthetic loans.

She has exhibited work internationally in Europe and the States, including Art Fairs (London and London Art Fair, Glasgow, Kunst Zurich, Art Chicago, New York, Los Angeles) and has been represented by Flowers Gallery in New York and in London (2005-2017), where she had two solo shows, “Small Acts” 2007 and “Subtly Into The Night” 2011 (Flowers/Cork Street).

In 2015, the Greek Museum of Cinema held her exhibition “Kinetoscopes” and presented her animations at the Cinema Screens of the 21st Athens Film Festival, as part of the project “Secret”/ hononary artist, curated by Or. Andreadakis. Other exhibitions in Greece include the Biennial Young Mediterranean Artists (2003), Piraeus Municipal gallery (2004), Zoumboulaki Gallery (2014 and 2019), Ionios Parliament Corfu (2017), Back to Athens (2018), Unknown Destinations Chapter ΙΙ – Shell, Politics of Beeing (2018) and plus9 curated by K. Prapoglou

Has also worked as a set designer in  theatre and films and a storyboard-artist (Martinegkou, directed by K. Evaggelakou, Theater of Art 2014, The Woman from the Past, directed by El. Karakouli, Poreia Theatre 2015, Movements for Nothing, stage design/ video / directing Kleio Gizeli, Epi Kolono Theatre 2013, storyboard design for Charitona’s Choir, directed by Gr. Karandinakis 2005)

Her work is part of public and private collections in Greece and abroad. Lives and works in Athens / London.

Apostolis Koutsianikoulis
He is a freelance creative. Prior to starting
his own media company “blac cinematography” he worked as a
stage and film actor – having graduated from the Athensʼ
Conservatory Drama School in 2009. He established “4Frontal
Theatre Group” with his alumni and shuffled between working as
an on-stage as well as a misc production member in various
stage performances. He formed the groupʼs specialty educational
branch combining acting and theatre/drama education (T.I.E./
D.I.E.) performing in schools and youth groups. He continued this
work with other theatre troupes touring the globe. He also
partially works as a theatre lighting designer as well as a DP in
filmic projects. His current post as a CEO and Creative of a media
company involves, planning and executing video work as a
director and a DP, ranging from documentary and experimental
films, to web and tv commercials and various promotional
content.

is a Greek composer and sound artist. He mainly composes music for dance, theatre and cinema, but he is also frequently working on solo projects. His music has been performed in many major theaters and concert venues all over the world (including, BAM Opera house – NY, Dallas Opera, EMPAC – Troy NY, Paris Villette, Ballhause Berlin, Gorki Theater Berlin, Macau CC, Shanghai Dramatic Arts Centre, Ancient Epidaurus theatre, the Onassis Cultural Centre NY, the Megaron Concert Hall, etc) He is also a frequent collaborator of the National Greek Theatre and the Greek National Opera. He has composed music for over 100 productions and is considered as one of the most important and prolific composers of the new Greek generation as well as a brilliant musician and virtuoso performer.

fashion design of costumes and decoration

“Who wants to divorce?” directed by Giorgos Kapoutsides, IVI Theater

fashion design of costumes and decoration

“Who wants to divorce?” directed by Giorgos Kapoutsides, IVI Theater

He was born in Athens and graduated from the Veaki Drama School. The last 10 years he has been living and working in Paris.

In Greece he has collaborated among others with: Giannis Houvardas (Oresteia – Athens and Epidaurus Festival), Anestis Azas (Pharmaconissi Case – Théâtre de la ville), Martha Bouziouri (Amarinthos – Athens Festival), Stamatis Fassoulis( La cage aux folles- Pallas), Dimitris Tarlow (Jungerman of Karagatsis), Yannis Skourletis / Bijoux de Kant (C. Goldoni’s The New House in the National Theater). He has collaborated in the cinema among others with: Kostas Gavras (Adults in the Room), Panos Koutras (Xenia), Sotiris Tsafoulias (The other me), Vasilis Doganis (Meltem), George Drivas (Laboratory of dilemmas – 57th Biennale). Also in the TV series: Life in the Grave, directed by T. Psaras, The Other Me 2-The Lost Souls, (1st and 2nd saison) by S. Tsafoulias, The Red River, directed by M. Manousakis.

In France, he has played in the theater with Charlotte Rambling, Lambert Wilson, Nicole Garcia, Julia Mignenes among others, as well as at the Théâtre du Soleil with the play “Mataroa, the Perforated Memory”. In the cinema, he has worked with: Agnès Jaoui, Fanny Ardant, Nicole Garcia, David and Stephane Foenkinos, Brigitte  Rouan, Nadir Moknes among others. More information at: www.polydorosvogiatzis.com

She was born on June 28th 1990 in Athens, Greece. She graduated from the American College of Greece, The Law School of Democritus University of Greece and Drama School “Praxis 7”, in Athens, Greece. In addition, she studied classical piano, theory of music, phonetics and solfège. Her professional experience as an actress in Athenian independent theater is “The little Girl into the dark forest”, in KET, “Othellos”, in Karolos Koun Theater, “Pests”, in Bios explore the Urban Culture, “Nordost”, in Studio Mavromichali, as an actress and dramatist is  “Αnger, the revolution of the couch-part #2”, in Bios explore the Urban Culture, “Clouds”, in Theater of Neos Kosmos, “Αnger, the revolution of the couch- part #1”, in Epi Kolono Theater and “Miss Julie” in Epi Kolono Theater. On camera she has collaborate with the dancer and choreographer Yannis Nikolaidis, the director Dimitris Chalkiadakis, the photographer Dimitris Mavrophorakis, the cinematographer Peter Nikoltsos etc. The last years, she has participated in several seminars and workshops about theater, contemporary and classical dance, juggling, butoh, acting and improvisation in front and back of camera. She practices on professional level Capoeira Martial Art (2010-present), participating in seminars and workshops all around Greece, on traditional and contemporary Capoeira, acrobatics and movement inspired by Capoeira and afro- brazilian culture. She has also taught kids, teenagers and disable people and has organized events with public purpose in collaboration with Stavros Niarchos Foundation, Municipality of Athens, Nea Smyrni and Kallithea, Best Buddies Greece etc. She speaks English, Greek, French and Portuguese.

The Little Girl in the Dark Forest at the Festival d’Avignon 22, 23, 24 July Gymnase du lycèe Saint-Joseph 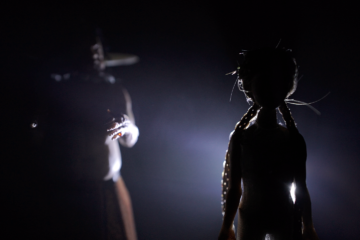 The Little girl into the Dark Forest 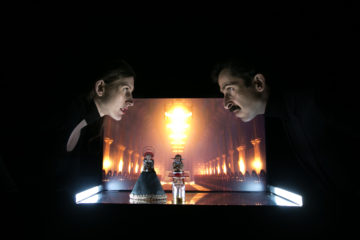